One Page Adventure #7: The Best Party

on May 03, 2019
Ok, so Marty is an idiot. Always has been. But he is family, what can you do? He has lots of debt and following the nature of debt also lots of debtors. And lots of nobles who he betrayed in games. And lots of Men and Women he cheated on and with. But Marty has an idea, you read in his letter. He 'won' an old ancient castle during a game of dice and now plans a party to make things good, with both friends and enemies, to "make things square" so he writes. This doesn't sound good, he might really need your help. Again.

Marty actually got to some money, legally at that. Not enough for everybody, but hey. Can't win 'em all.

Unbeknownst to Marty (and the heroes) the castle he won is cursed and an old Ghost King slumbers deep within. The Ghost King once ruled all of the inverted world and now finally just wants to sleep. She (yes, "she". Once asked why she calls herself a king she answered: "mortals have kings, have they not? So be it! I am the King of the inverted sun!") is alien, ancient and spite incarnate. You really shouldn't wake her up. 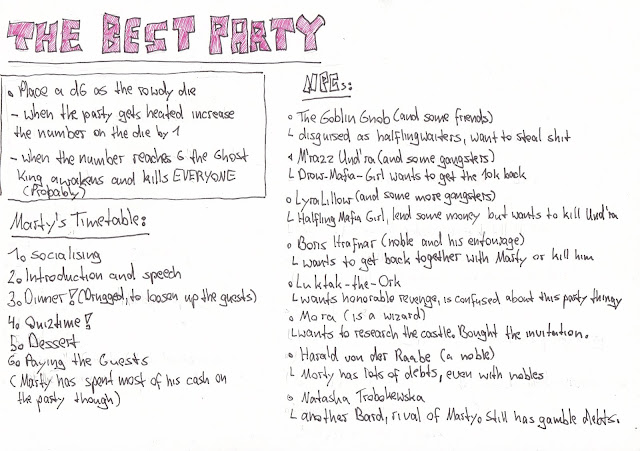 To get things started just work down Marty's Timetable and when things get boring chose an NPC that starts some trouble (just decide on one or roll a d8). When the rowdy die gets higher make sure that the PCs have a chance of noticing things going badly.